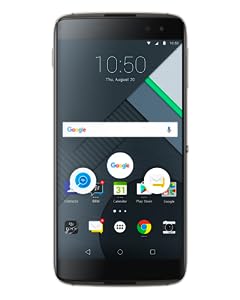 New Choice in the DTEK Series of Secure Smartphones

You wouldn’t put money in a bank that didn’t lock its safe. Or leave the doors of your home unlocked at night. Having a smartphone that doesn’t take your privacy seriously is the equivalent. The DTEK60 ensures that how you share the private details of your life—your location, your pictures, your texts—is your decision. Not all smartphones are equally secure. With the DTEK60, you have built in armor protecting your personal information.

BlackBerry DTEK60 smartphone was launched in October 2016. The phone comes with a 5.50-inch touchscreen display with a resolution of 1440 pixels by 2560 pixels at a PPI of 534 pixels per inch.

The BlackBerry DTEK60 is powered by 1.6GHz quad-core Qualcomm Snapdragon 820 processor and it comes with 4GB of RAM. The phone packs 32GB of internal storage that can be expanded up to 2000GB via a microSD card. As far as the cameras are concerned, the BlackBerry DTEK60 packs a 21-megapixel primary camera on the rear and a 8-megapixel front shooter for selfies.

The BlackBerry DTEK60 is a single SIM (GSM) smartphone that accepts a Micro-SIM. Connectivity options include Wi-Fi, GPS, Bluetooth, NFC, USB OTG, 3G and 4G (with support for Band 40 used by some LTE networks in India). Sensors on the phone include Compass Magnetometer, Proximity sensor, Accelerometer, Ambient light sensor and Gyroscope.

Be the first to review “BlackBerry DTEK60” Cancel reply PRIV by BlackBerry BlackBerry secure smartphone, powered by Android. PRIV™ combines everything you expect from BlackBerry plus the full eco-system of Android and its apps. PRIV comes with added security to let you know when your data could be at risk, so you can take action to improve it. PRIV...
0 out of 5
0 review(s)
KES24,500.00
Add to Wishlist